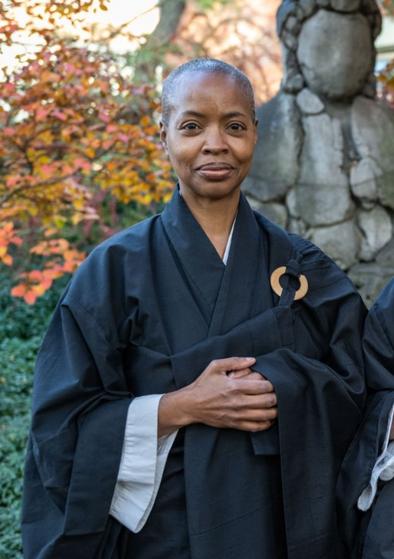 Venerable Jissai (Jeanette) ​Prince-Cherry was born in North Carolina in 1967. She served in the United States Air Force for eight years and earned a B.S. in Industrial Engineering from Southern Illinois University. For nearly 15 years, she worked in engineering before leaving to dedicate her life to the Buddhadharma.

Jissai began practicing Zen in 1994. Since then she has maintained a  daily personal practice and regularly participates in group sittings,  intensive Zen meditation retreats (both group and solo), and periods of residential training including past pilgrimages to a Zen monastery in Japan. She works closely with her teacher, Roshi Bodhin Kjolhede, Dharma successor to the founder of Rochester Zen Center, Roshi Philip Kapleau. With her teacher's on-going guidance and support, Jissai began instructing others in Zen meditation in 1999. She now leads sesshin and offers group and private instruction.

In 2022, she was ordained as a Zen Buddhist Priest of the Three Jewels Order of the Cloud-Water Sangha. "Jissai", pronounced JEE-sigh, means “true encounter". ​Click here to hear her 50-minute Coming to the Path talk about her journey to the Dharma and to the Rochester Zen Center.

Jissai feels honored to serve Zen sanghas (communities) in Louisville, KY, and Rochester, NY. You can support her Dharma work through  financial gifts via PayPal.Me or by making an offering of personal items or study materials from her Amazon wish list.